Here are two photos that show that getting the conditions right, particularly the light and also the timing, deeply affects the impact of a photo.

In this first example, the light is actually OK. I suspect though that the composition would work so much better if there had been absolutely END_OF_DOCUMENT_TOKEN_TO_BE_REPLACED

I’ve just spent a week at Open Studio Workshops in Mellon Charles in Wester Ross, on the coast of the Scottish Highlands, learning “The Art of the Edit”. I hope. It was certainly a great experience, great people, tutors, students and support staff.

We have a huge magnolia tree in our front yard. It keeps getting bigger, but as it ages, bits keep dropping off – it seems particularly at risk during ice storms. It’s actually a little late this year, but each spring we get an amazing display of blossoms. And END_OF_DOCUMENT_TOKEN_TO_BE_REPLACED

Inverness was everything I hoped for, seemingly the most temperate area, certainly north of the Central Belt; a good location for heading out to explore, even down to London; and lots going on in the arts and technology, a hub for the highlands and islands.

My long, 180mm, lens was actually in my bag getting ready for Connemara, and I took it out (looking for ways to save a little weight). I knew at the time I would regret it. I did regret it. So as soon as I was back, I took it out in the backyard and gave it some exercise.

Yes, we were on a workshop in Connemara, but that’s no reason not to take in some of the biggest sights in western Ireland. The Cliffs of Moher were quite a trek from our base west of Galway, on the north side of Galway Bay. The famous cliffs themselves END_OF_DOCUMENT_TOKEN_TO_BE_REPLACED

Connemara has a lot of coastline, even a fjord, and David Ward worked hard to help us see as much as possible in the time available. We were at Gorteen Bay (Port na Feadóige) and I became fascinated watching the water swirling around this group of rocks. One moment the water would be completely still, and then the motion would start and pick up pace until it finished its intricate dance and sat down to rest again; before repeating the whole process. Eventually I set up the camera and »

Over a month since I was last in Black Pond Woods at the Leslie Science Center, and while the almost overwhelming color is still » 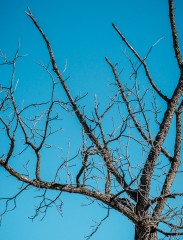 Earlier in the winter, whenever I was walking into town, I would look at all the bare trees along the way and think, they’d make great photos, all that »