This is from when I visited my friend Paul Thacker in Portland, OR and we went downtown with our cameras. When I got back he sent me a print of the photograph he had taken when we standing next to each other. This first image here is how I had developed my version while still at Paul’s. I was struck by how blue, really blue, the sky was in his print, and I thought I wanted mine to be like that, that that was “right”. And it occured to me I might get that way if I reduced the exposure a lot more than I had. That worked some, but then the photo was duller, so I increased the highlights a lot as well as increasing the saturation. To make the sky bluer, and not just richer, I reduced the red a lot. I got pretty close (see second image). When I printed it, the bricks looked even more orange than on screen. (I did apply a similar set of changes to a number of other images as well) 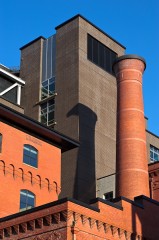 So I let that sit on the table for a few days, and then I went back and started again. First I re-calibrated my monitor (I was surprised how much it had drifted since last time) I still have a little more exposure reduction, and a little extra saturation, and the highlights are a little up, so the major changes are using a different input profile (Adobe’s Camera Neutral v2 instead of Adobe’s Camera Standard v2), changing the color back from Adobe’s Daylight (5500) to Nikon’s Daylight (5000) and reducing the blue in the Hue part of the Hue/Saturation/Luminance control (to darken the sky). 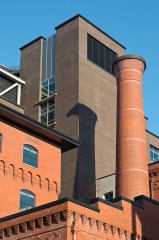 As well as re-calibrating my monitor, I profiled my paper. I’ve been using Epson’s cheapest glossy paper for test prints, but it doesn’t seem to have a profile or come up on any of the print dialog drop-down. Which is why, although I thought Lightroom might be doing a reasonable job at printing, I still wasn’t confident in my prints. Now my prints are looking “as expected”. This final image is where I’ve stopped (for now!)