This week we got a couple of days out of Ann Arbor and met with an author in St Joseph. We had hoped to meet with another author in Saugatuck, but schedules never meshed. We had to content ourselves with a hike through the Saugatuck State Park to the beach, where I took this photo.

The first version is pretty much out of the camera. When I left a test print on the table for review, Jill suggested cropping some of the beach. We went through this a few times before I said, no, no more. 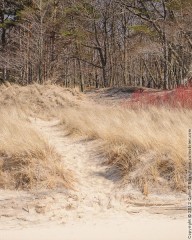 There were a number of elements that had originally attracted me to take the photograph, and of course one of them was the path, so I also tried this alternative crop. Hard to tell which I prefer, but it reminds me to always try and take photographs in both portrait and landscape orientation.