This past week I’ve been a couple of times out to Parker Mill, photographing along the Fleming Creek. We can say that I take photographs of animals almost as rarely as of people. Sure, when I get near “big water”, it’s difficult not to include the odd seagull or ten. But normally, not often. But if they appear on the scene, and insist, I will take their photo. Seems this was just such as an occasion, as this heron seems to be living under Geddes Road. Most of the time, he just seems to stand in the one spot, off to the side. And then he’ll spot a fish (I assume) and he races over and grabs it. 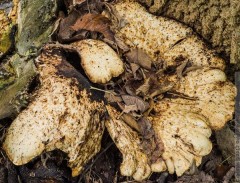 Taking photographs of details on the ground is not quite so rare, but this is still pretty exceptional. I was exploring the footpath on the North side of Geddes, and found this fungus growing at the foot of a tree. Not sure if I did it justice, the photo seems kind of flat, but it’s not the camera’s fault; it did what I asked it to.