Last weekend we were in Cleveland. Actually left Thursday and had lunch at the wonderful Toledo Museum of Art and a casual stroll at the Ottowa National Wildlife Area, before settling in for the evening just west of Cleveland. The first image is from the west side of Cleveland the next morning. As Jill was looking around an upholstery store, I had a look around the neighborhood. 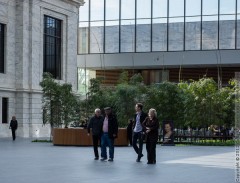 The main goal for the day was to visit the Cleveland Museum of Art. We hadn’t visited since they re-opened after being closed for a couple of years to build this vast extension. As well as additional exhibition rooms, there is this large indoor space, with a new restaurant at one end, behind the greenery, and it looks like the rest of the area, behind me, is used for performance events. Before the sunset we got down to Lake Erie again to hike through the Cleveland Lakefront State Park. Nice views with the sun setting behind downtown Cleveland. 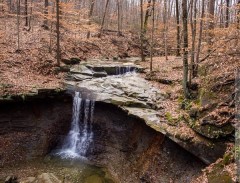 Our final day was focused on Cuyahoga Valley, the National Park, We’ve been there a few times before and there’s always something interesting, new, to check out. This time we managed to get to the BLue Fen Falls. It had been raining the night before and we weren’t really equipped to go much further on that trail and went back down to the canal/river/rail track for a longer hike. On the way home, we managed to fit in a late lunch in Oberlin. A great little break!