When we drove south yesterday we were listening to Dianne Rhem on Michigan Radio and her guest was Billy Collins, former poet laureate. I forget now how they got on to it, but he was talking about how he went through this period when everywhere he went, as he traveled around the country giving readings, how people would say, oh you should have been here last week, or next week, and you would have seen the azaleas at their peak, or the fall leaves at their peak or the sandhill cranes gathering on the Platt Rover and so on. And he said that Howard Nemerov (also a former poet laureate) had given this the name azaleation (more accurately, people commiserating? with you for your poor timing). And as we continued our drive south through Ohio, we realized that was what we would be looking at. When we were thinking of where to go for our break, websites were saying peak fall color in S Ohio was late October. Obviously not late enough yet, as we are clearly too early. Well, too early for peak. 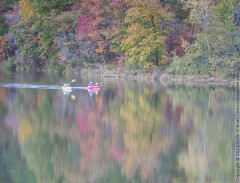 So what’s wrong with this picture. Fall color? sure looks like it. But there’s nothing in focus. I think I’ve been struggling with focus for a few years (at least) – where to place it / what to focus on, how to get all I want in focus (without using an aperture that will reduce rather than enhance clarity) – but even in my greatest failures, there is always something in focus. Not here. And I was on a tripod. I had the camera set up and waiting for the canoes to come into the frame. I checked. Everything was good. I can’t blame the tools, it’s obviously me that chose it, but maybe this older lens doesn’t work that well on this newer camera. I will have to do some more testing.