It’s now 11 days since 14.1 inches of snow fell on Ann Arbor in less than 30 hours. Obviously not as drastic as Boston, MA, where the season total has now passed 100 inches (despite this one big snow fall, Ann Arbor barely got past half its average February precipitation, and let’s not forget last year our snow accumulation broke records) and certainly nothing like the 90 inches that fell on Buffalo, NY at the start of the snow season; but 14 inches in one go is certainly a lot for us.

Anyway, decided it was long enough since the camera had left the house (almost 3 months!), so I decided to take a walk into town and show what things look like after all this time, starting with our house and our street. The field on my left belongs to the city (actually the Water Utilities Department, being as it is the path of a buried tributary of Allen Creek) and behind me is the local sledding “hill”, known as Slauson Field, thanks to being the rest of the year the sports field for Slauson Middle School. 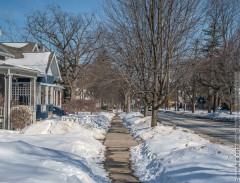 Most winter days here, I think, are sunny, like this day, which can lead to melting, as you see down the edges of the sidewalk. This is on Liberty, one of the major spokes out of the city center, not far from where we emerge from our street. The city requires homeowners to clear the snow from their sidewalks within 24 hours of the end of a snowfall. 14.1 inches is a lot to clear in one go, so I was out shoveling eight times in that 30 hours, doing different parts of the sidewalk, driveway and back deck (needed to get to the garage), keeping the amount of snow in need of removal within reason. 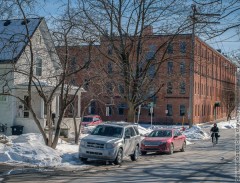 The building in the background here was once the factory where they made Argus cameras (no, I hadn’t heard of them before we moved here). Nowadays it serves various functions for the University of Michigan (at least, I think that’s still true). If you click on the photo, you’ll get an idea of just how well wrapped up that bicyclist is. Some days we’ve been waking up to warnings about not exposing skin for more than half an hour, and I don’t know how many people actually get on their bikes those days. Certainly, unlike this person, most riders I’ve been seeing the past month or so seem to be athletic males, with the latest in high tech winter bike-riding clothing (not to mention their bikes). I have to confess, I am not one of them, my old bike having a few months rest at the back of the garage. 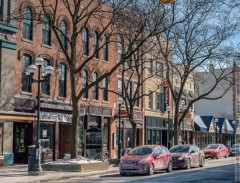 The Main Street Area Association of course pay contractors to keep the sidewalks clear of snow and the city works on keeping the roads clear. For the first few days after a big snow it can seem like they are competing with each other, with the result that snow piles up on the sidewalk where you want to step out into the crosswalk, but as the days progress they all get a better handle on things and cart most of the snow off somewhere. Now, on Main Street itself, you only see it on the tree “boxes”, though down the side streets there are still remnants along the sides of the streets. While the lesser roads get coated with grit after a major snow, the major roads get salt during and after, which you can see caking the first car in this picture.

If it weren’t for the cold, it would all be perfectly normal; but of course, without the cold there would be no snow, and we would just be looking at the dead vegetation waiting for spring.