This year is the 30th Anniversary of the Leslie Science and Nature Center (LSNC) in Ann Arbor. I am one of a large (20+) group of artists who have been invited to participate in a project to create artworks that are based on and relate to the Center and its mission. Friday was the kick-off meeting. As I drove into the Center I realized that we had been here once, not that long after we moved to Ann Arbor presumably, as part of exploring the area, and then I guess forgot about it. No idea why, but I think we only explored the buildings around the Leslies’ house, and didn’t discover the trails behind. Anne Glendon from the board gave us some background on the Center and how the art project will feature during the year, and Susan Westhoff, President/Executive Director went into more detail about what was at the Center; I wasn’t the only one who had not been there before. We all went on a tour of the buildings, especially the former home of the Leslie family, now the Center’s offices, the Critter House and the Bird of Prey Enclosures; the raptors (as they call them) have all suffered some injury in the past and, although now recovered, would not be able to survive by their own means in the wild. 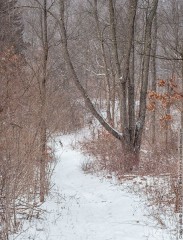 Friday was probably the coldest day of the year so far, and not everybody went on the hike down to the so-called Black Pond (pictured above, without water and covered in snow), which we learnt is a vernal pool, and we learnt what one of them is. By the standards of the Ann Arbor area, the trails pass through a hilly enclave amongst the housing on the North side. I took a number of photos with my phone around the buildings and along the trails, and just this one with my main camera; even though it was hand-held, the group was still well out of sight by the time I had what I wanted! The main event for the project will be an exhibition at the Kerrytown Concert House in December, so we will have plenty of time to explore and develop an appropriate subject/scene, and there is an option to get involved in Mayfly which is their annual fundraiser.