I was fortunate to be able to sign up for a workshop (photo tour really) in Connemara, Ireland with David Ward. Fortunate, because this is the third or fourth time I’ve tried for one of his workshops, but previously was always too late and it was already fully booked.

Because I had had to be in California for a few days the week before, I flew into Ireland a day early to try and catch up on what time zone I was in. I stayed at a hotel right near the waterfront in Galway City, on the River Corrib just before it reached Galway Bay. Just needed to turn left out of the hotel entrance and I was on the High Street which, as this photo shows, is a narrow pedestrianized street, just full of people walking, eating, making music, watching people make music, seemingly at all times of the day. I was able to explore some of the city centre and docks area, pick up a local SIM card for my old phone, and visit the Cathedral. 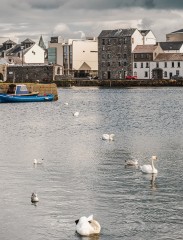 Next morning I went along the Claddagh Quay, which seemed a popular walk, out to the South Park. On the way there were plenty of swans who seemed happy to pose for me and other photographers. I still had time for another wander to the Cathedral, before David called me to say he had made good time from his pickup at Shannon Airport with all the workshop attendees from the S of England and was ready to head off to our base. It turned out that was the only time I needed my local phone, but vital, as I was still 10 minutes from the meeting place.

It was another hour or two out to where the house was we were staying at, so I had plenty of time to get to know the great group of people who had signed up for the workshop (all apart from me repeaters with David, although none had ever been on the same workshop before)

There are some more photos from Galway City in my Connemara 2016 gallery.