Here we are again at the cottage by Lake Michigan, near Michillinda. This is the one owned by Jill’s cousin, where this photograph originated. When we arrived, we headed down to the strip of beach there, and this is the view as you head down the steps to go from the cliff top where the cottages live. The Lake is constantly assaulting the beach here, and this year the water level has risen sharply, so there isn’t a lot of space, but we were all to walk and talk for a while. 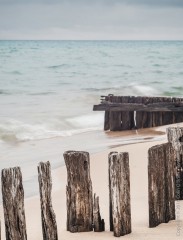 Next day we were thinking of walking further along the lake, but realized that with the lake level this year we wouldn’t be able to get any further than the first headland. So Jill settled down on the seat half-way down the steps to read her book, while I went along the beach with my camera. I wanted to experiment with longer exposures to see what sort of effects I could get with the waves. There have been some serious attempts over the years to protect and preserve the beach against the power of the waves, but the waves are clearly winning.