There was a time when I was really concerned with detail, with sharpness, in my photographs. With my first digital camera, it didn’t have too many pixels, and I found that frustrating. Many years later I discovered the issue was really more with the software, and reworking those files now, I am frequently amazed at just how much detail the image contains.

Because that had a 4/3rd sensor, depth of field was not something that I had to think too much about. When I moved into full-frame 35mm DSLR, I found the whole business of focusing and aperture to be much more challenging. I was convinced that everything had to be in focus, front to back. An experiment my friend Paul suggested helped free me from this burden, and allowed me to relax and be more inventive and interpretive. 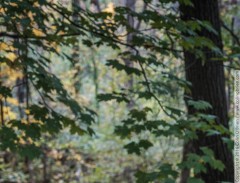 This year I’ve frequently had the habit, moving from one location to another, when one was a close up composition and the next was more distant, or the other way round, and I make an exposure before refocusing the camera. Sometimes it even works; that I like the composition and other elements and the out of focusness of the whole picture is a positive rather than the distraction that I frequently would feel when I’ve not achieved in focus and out of focus in suitable areas. 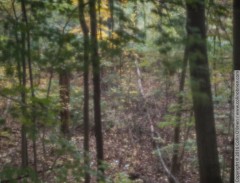 Now I’ve got a pinhole (lens cap) lens, and this provides yet another idea of what it means to have everything in focus, or not. Focus of course is a funny word in this context, since there is no focusing ring on the “lens”.

These three photographs illustrate three different interpretations of the idea of variable focus or sharpness. The first results from a combination of handholding the camera with a long exposure and a lot of wind blowing the grasses (in our garden) back and forth. The second comes from leaving the lens focused still from the grasses shot, when arriving at Black Pond Woods. The last is from standing nearby and using the pinhole lens.