On the Isle of Harris, I drove south from Tarbert along the west side of the island. I stopped for a few hours on the A859 at a couple of places around Seilebost. Every which way I pointed the camera, there was a new idea of how to make a photograph, mostly across Fadhail Losgaintir to Luskentyre Beach. Well, it seemed so at the time, though reviewing the files on the computer, there is a lot of similarity. 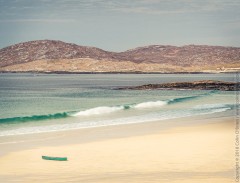 I did watch this fascinating drama unfold where someone carried a canoe down on to the beach from the road, return to his car, and sometime later return with a friend, only for them both to return to the car before the first man eventually came back to the canoe, put it in the water and sailed away through the gap with Taransay before heading who knows where.

I took a break at Talla na Mara at Horgabost, eating at the Machair Kitchen, buying a painting from Marigold Williams, before heading around to the parking for Luskentyre Beach. Wow, what a great beach to walk along, and make photographs of and from. It was a beautiful spring afternoon, and I walked so far that as it became late I wondered about the tide and getting back to the parking, but no problem.