Third and last time in Inverness on this trip. I had been thinking of going up to Wick for the day, but realized, after a not-too-early start and a detour on the way, that would never happen, and stopped when I got to Dornoch and explored the effects of the sun getting ready to set on the beach, heading back to Inverness by dark. 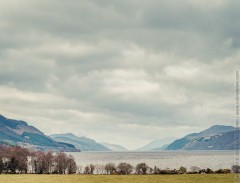 Next day I was able to recreate a great day out I had 29 years ago when I was staying in Glen Nevis, driving down one side of Loch Ness (this time only as far as Fort Augustus) and back up the other.

And on the way back I stopped for a short hike at the Dundreggan Estate up to this waterfall on Allt a’ Choire Bhuidha. I’m very interested in efforts to restore the Caledonian Forest, which at one time covered much of Scotland. Not that its the only way the landscape has been over the millennia, but in the context of endangered animals are most threatened by the loss of habitat, and we will all be the poorer from a lack of diversity, habitat is critical. When I get home I’ll be joining Trees for Life. 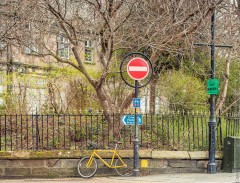 The last day of the trip, I walked from my B&B on one side of the River Ness over to my favorite cafe (Velocity), taking photos all the way, and back, to give Jill a sense of my time in the town. And there was still opportunity later in the afternoon for one last outing, to Cromarty (famous since childhood for its part in the shipping forecast). 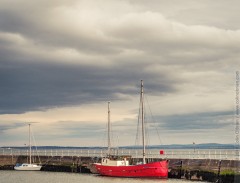 But I never did get to go along the Moray Firth, towards Aberdeen. And I only briefly saw the Cairngorms, as I went from Elgin, after collecting the car, over to Aviemore and headed down the A9. More for another time.