When I arrived at Moffat the night before, I had a vague idea I’d been here before, but I didn’t recognize anything. In the early morning of a new day, I realized I had, but last time I had approached from the south, not the north, as it was a half-way point at the time for Jill and I to meet Peter and Sheila for a coffee.

I did take some photographs, but time was pressing again, and after breakfast I was galloping south again. Now I was taking more major roads, even motorway, so while there was plenty of good scenery, it was that bad set of nowhere to stop or nothing to view where I could stop. I did squeeze in a stop for a church, but the main highlight was the broad avenues, not roads, of trees around Castle Howard. They were great to see, although not so easy t o photograph. 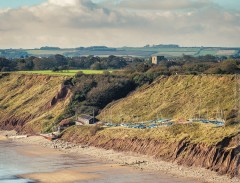 Now that Martin and Rachel have joined Peter and Sheila in moving to York, arranging dinner together is easy for them. I stayed with Martin and Rachel to check out their new home. Next day was not a work day for Martin, so he and I went across to Filey. In the earliest, most ambitious version of this trip, I had hoped to come down the Yorkshire coast and even get into the Wolds – admittedly, some of those plans had involved flying into Hull, but in the end none of it was possible, so this excursion to Filey Brigg was compensation.

Really all we were doing was going there for lunch, as afterwards we had to get back to York so I could drive over to my brother’s. I did get some photographs at the Brigg, but on the way back we didn’t see so much that was readily accessible, and I couldn’t resist stopping for a coffee in Stamford Bridge. There’s obviously great countryside between York and Colne, but no photographs today.