Before I left home, I had not been able to settle on what to do after Gairloch. The general idea had been to continue heading south and west. Now I was there, I was finding it impossible to find anywhere to stay. I gave up on that plan and headed north to Lochinver.

Heading out of Ullapool, the scene was quickly dominated by the peaks of Stac Pollaidh. I stopped a few times to try capturing a photograph, until I came to a side road. I’m not sure if it was saying it would lead to Stac Pollaidh, and I didn’t really have any intention of going there, but I had plenty of time so I thought I would take this road to discover what was down there.

First, yes, it did go to Stac Pollaidh. There is a nice little parking area at the start of the path, which goes most of the way up one side before snaking round the back and finishing the ascent from the other side. Or so I’m told; by now I wasn’t sure just how much time I really had, so I went up until just before the path headed round the back and after a few photos headed back down. 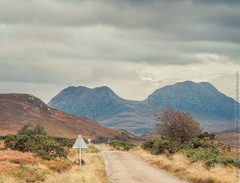 I didn’t head back to the main road to Lochinver; it looked like I could continue along a coastal road instead and save the main road for another day. When I reached the junction to turn north, I still had it in my mind that I could first go down and look around Achnahaird and maybe even get a good view of the Summer Isles. Not very much further down the road it crossed what must be one of the shortest rivers anywhere. The River Garvie goes from Loch Osgaig on one side of the road to Loch Garvie (basically the open sea) a hundred yards or so on the other. And if ever there was an opportunity to explore trees surviving in the adverse circumstances of a waterfall, or at least cascades, this was it. There was the rest of the afternoon gone.

After that it was time to get back on the road to Lochinver, single-track virtually all the way with constant twists and turns to accommodate the results of timeless water activity. Disappointingly nowhere to stop for photographs except one oddly parking lot, whose purpose I wouldn’t realize until I came back the next day.