Because of some odd scheduling by KLM, I flew into Aberdeen so I could fly out of Aberdeen and make a connection in Amsterdam, which was not possible with a flight out of Inverness. 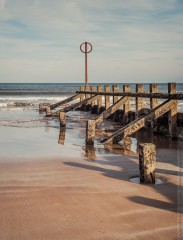 I had not been to Aberdeen before and made arrangement with the B&B to arrive early, drop off my non-photographic luggage, and go explore. Frances, the owner, gave me some recommendations which were an eye-opener. Who knew (and I’ve checked with a lot of people) that Aberdeen has a beach, and such a big beach, it seemed to go on forever. Judging by all the groynes, the North Sea must give it a serious battering. 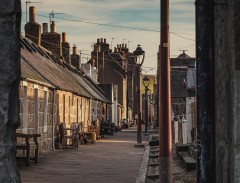 At the other end of the beach is the old town with the University. The recommendation was to go that way, but by the time I had finished photographing the beach I decided that would be too far and instead took another recommendation to look around Footdee, an old fishing village, and then alongside the harbour.