Yesterday I was on the train out of Kyle of Lochalsh on the way to Inverness, one of the few running in Scotland! debating whether to get off on the way and get the next or just go on to Inverness.

They have a system at each (unmanned) station where you can talk to someone central – they seem to know what they are talking about. There are no trains today to Wick and he was doubtful about heading up there and back over the weekend.

It’s oddly stressful, all this talk of the bad weather, the impact on travel, and of course, will the train I am planning on actually run. This morning, the Scotrail website seemed to be waffling as to whether the trains between Kyle and Inverness would run. I discussed the situation with the folks at the Plockton Inn, that if there was no train I might need to stay an extra night, and they said no problem, everyone else had cancelled their booking and they would be empty! 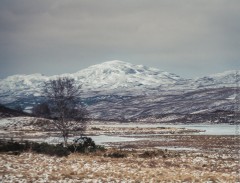 As it happens, I took the train into Kyle of Lochalsh, and then back up to Inverness. Where I got off the other day, Achnasheen, there was now barely any snow. I had been thinking of getting off this time at the next station, but I decided against it. There are a few stations on the route that are non-scheduled stops, you have to tell the conductor you want to get off (or I guess wave your arms if you are standing on the platform and want to get on) and the problem was deciding in advance whether to ask for this, without having seen what the local scene was, so I decided to keep life simple and stay on the train.

The line to Wick has been closed at least yesterday, certainly today. At Inverness I spoke with the ticket office and they said the rail guys would have to ‘prove’ the line before service could resume – basically have a plow train travel the line – so clearly the 7am train would not be running.

Looking at the weather apps (I have a new one called Windy), it was clear the problem is around Golspie; the wind travels across the NE coast and hits land there, and continues to dump snow. The forecast for tonight is another inch there, and another inch tomorrow. The radio though was talking this morning about 5 foot snow drifts at Tain.

Anyway, last evening the Scotrail website was already saying all trains to Wick today had been cancelled. I don’t really have a plan B for Wick. While I was on the train yesterday I exchanged email with the AirBnB in Wick (they are very understanding and will let me cancel if I need to) and the folks here (they have vacancies for Saturday) so I was able to switch that part of the plan. If the trains start running Sunday, I could take the train halfway from Inverness and then get on the one coming back the other way. Or I could go all the way to Wick and on Monday get the train down to Inverness and just keep going to Aberdeen.

So yes, the weather finally got the better of me and I gave up on Wick.

I looked into Glen Affric and the b&b had a vacancy but ironically no bus back Sunday. I thought about 2 nights, but there is snow forecast from tomorrow afternoon on, and there’s probably no risk, but just seemed like too much…

And there’s snow forecast for the train route on Monday…

I moved my reservation for Inverness tomorrow to tonight, and later I’ll look for somewhere on the way to Aberdeen, like Nairn.

Southwest from Inverness was the only direction I hadn’t had in the plan, but now today I could take the bus to Dromnadrochit, half way down Loch Ness. I went for a walk inland, took a few photos, walked back to the village and had a coffee. I tried a walk, through some woods, I got from an info board at the car park, almost reached the Loch.

I was returning from the woods to the main road just as a woman came along with her dog. My tripod is a big giveaway and she commented I should have “gone out to the falls as they are frozen”. I mentioned this later to Matt Sillars, and he didn’t know where she would be referring to, so I don’t feel so bad that I hadn’t known anything about it.

We kept walking now the same direction and I probably said something like the falls would have to wait for another day as I was heading for the bus and she offered to give me a ride, so I accepted. Very nice, dog was also very nice, interesting chat, and she delivered me to the hotel, much earlier than I had expected.

My friend Matt who teaches psychology and photography at UHI, and is the director of the FLOW photo festival, was available for coffee in the hotel, and we had a much longer, better, chat than I had though was going to be possible.

I showed him 60 of my photographs from last October. If I ever get to have an exhibition anywhere, I must get him to write the text. He’s good on the conceptual stuff, immediately got what I had been trying with the waterfalls as well as plants etc surviving in adverse conditions and ran with it; things like knowing why this mark is the thing that makes the image, and he just knows lots of great words.