I traveled down to see my friend Paul. He had been making various experiments and discoveries regarding how our vision works with how we print, and how to prepare files accordingly for printing. How people see, and how it relates to all we do with our photographs, is a major part of how I am approaching my photography nowadays. Paul has been so involved in his studies that when he has been calling me, he’d produce a stream of numbers and ideas that I had been struggling to keep up with, So I was looking forward to this opportunity to sit down with him face-to-face and work through everything, slowly.

I’d traveled down with the threat of major snow storms in the Pacific North West, but for the most part it seemed I had managed to stay ahead of the storms, and they were not so bad in the Portland area anyway. Still, it was good that we had a reason to stay in the first day. Paul had set up a test subject for us to photograph with different cameras of different size sensor and pixel count. This would give us one variable in our tests. Since I had not brought my laptop, it fell to him to do all the processing to have the files look similar. 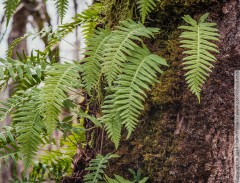 Paul had two key data points to consider: for a print of a specific size, there is an optimal distance from which it can be viewed and the maximim of detail perceived; because of the resolving power of human vision for different sizes, it was necessary to resize the file accordingly. We started at the beginning, defining all the variables, progressing through all the equations he had been working with and I was not getting any less befuddled. He had previously sent me the articles, from companies like Schneider Optics, that he was deriving his ideas from, but they had not been of any help. It was only when we looked at some sample prints, of a leaf, at different sizes, that I could get to grips with what was going on. It was very clear that a smaller print was not showing the same detail that a larger print was showing. One theory is that there isn’t the physical space to show such small detail on the smaller print, rather than any question of number of pixels in the file being sent to the printer, or the print resolution (ppi) specified; more to ponder. 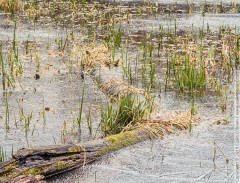 The next day it was good to get out and stretch our legs. We stayed on Sauvie Island and went to the Wapato State Greenway, which has a nice variety of wooded areas, with lots of moss and tangles, pools with areas at different stages of progression to land, and river (Multnomah Channel). I was able to make photographs in the different parts, though got ahead of Paul on the trail, and then turned back without realizing it was actually a loop. This was OK, as on the way out I had noted places to photograph on the return, and I was able to see most of them again and get the photograph I had seen, plus a few more.