When the weather warms, we venture further from home and go for a walk, hopefully combining trees and water. I don’t take the tripod, normally only one lens, maybe two. The point is mainly to have a walk with Jill, but I also use it as an opportunity to stretch out, to explore different photographs. Now it means I’ve no tilt or shift, an interesting test of how important it is, but yes, I notice many photographs when I would have used it if I had it. 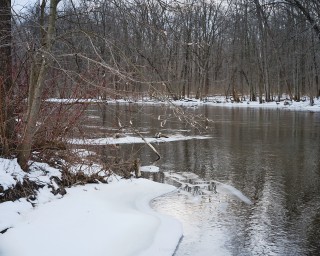 The Hudson Mills Metropark has various trails through the woods, as well as the paved trail along the river. That’s where this photo was made. I’m getting the hang of this camera, what settings to use, so that when I want to, I can make a reasonable effort of getting it sharp where I want it when hand-holding.

The opening photo is not one where I was looking for sharpness. Rather, I tried settings to create a longer exposure, and then moved the camera while pressing the shutter. In the world of ICM (Intentional Camera Movement) there are lots of possible moves. It’s difficult I find to get anything looks interesting (to my eyes, though I’ve seen many by other photographers), that expresses anything about the scene photographed. I tried a few, and this is one of the better.

This last photo I feel was much more successful, even though the movement was probably the simplest I tried. 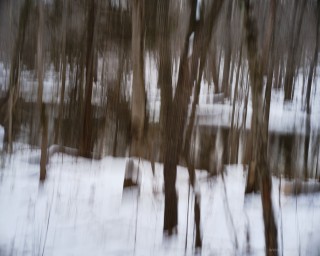