Another day in the Connemara workshop with David Ward and we stopped for lunch on the road from Leeann to Lough Nafooey. The box lunches, provided by David’s partner Saskia, were always fabulous. As each person finished eating, the cameras started coming out while we were waiting, and soon we had all spent a good while “exploring” the valley below, chasing the shadows and clouds on the far hillside. 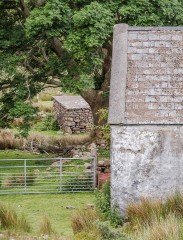 We went down to the house we could see in the foreground, just after crossing the Fooey River. Around Connemara you see a lot of houses, from a certain period, abandoned, walls mostly still there, but no roof; and frequently a fairly new house right next to it. So this one was unusual, in obviously no longer being used as a house but still having a roof, and clearly being used by sheep for shelter.

More in my Connemara 2016 gallery