Continuing on the workshop in Connemara with David Ward, we were heading N and stopped by Lough Ahalia; not surprising as there was an attractive little hut just begging to be photographed (even when (especially?) there was a steady drizzle).

It turned out this was a regular stop for the tour coaches out of Galway City, as quite a few pulled in while we were there, everyone jumped out, took a few photos, and jumped back on for the next highlight. Some people did come to see what these strange people with tripods were taking photos of, but most people did a quick scramble across the rocks to see this small waterfall (cascade?) on the other side of the road. I think I was the only one in our group who ventured over there. 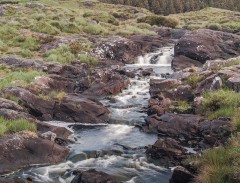 A few miles further down the road, we saw another hut – and to be fair, just there was the first opportunity to stop and check out the lilies growing in the stream alongside the road and even then we’d had to park a ways along the road as there wasn’t anywhere to really park right there. So it was all the more amazing how many people would stop on the road, jump out, stand by one us, take a quick photo and jump back in their car; or in a couple of cases, didn’t even manage to get get out of the car, just slowed down enough to lean out the car window and take the photo. A totally new experience came when someone stopped behind our bus, got his drone out of his car, and flew it back, not only to where we were, not only to share in our inspiration, but even to enter some of our photographs (sadly not mine, so I can’t show you).

There is another photo of the hut at Lough Ahalia in my Connemara 2016 gallery and one of the other hut in More from Connemara.