We haven’t been “Up North” for a long time. One of the poets Jill publishes, Holly Wren Spaulding, has a residency at the The Old Art Building in Leland. Normally residencies there (any gallery?) are by visual artists, so if we needed any more encouragement to go up, we didn’t, we were keen to see what Holly was up to (since we already knew it wasn’t about her most recent book).

We missed the opening reception for her show “Lost Lexicon” as we couldn’t get cat care but we did get up for Holly’s artist talk, and fascinating it was. What was on show, on the walls of the gallery, were framed letterpress broadsides of poems, and each poem was titled with a word, from nature, that seemingly was being cut from the Oxford Junior Dictionary (in favor of more “modern” (read tech) words). Holly’s talk, “Poetry as an Act of Conservation”, however went beyond this and was mostly concerned with how poetry, or lines from poetry, can be used in public spaces, and not just in books, in ways very similar to art. She gave examples of other writers, such as Jenny Holzer, who have shown text in public spaces, for instance in hospitals (interestingly often in Scotland!) and on stone, such as Robert Montgomery and Ian Hamilton Finlay. Most interesting was this video showing poetry, including Holly’s, being projected onto buildings in Brooklyn, NY. The talk was well attended and very well received; Holly’s project is really about finding other places for poetry to live, but everyone present was very keen to see the set delivered as a book, even after they’d bought up all the limited edition broadsides. 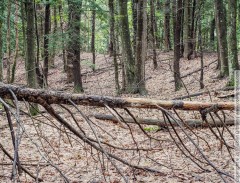 We had booked to stay for a couple of nights at a B&B in Northport. We tried a hike in Leelanau State Park. Nice place, generally open views of well-spaced trees. Sadly Jill had to accept she couldn’t do simple things like hike in the woods any more thanks to her second hip, and it rained. The afternoon was more relaxed; we went to Peterson Park which I had discovered the evening before, after we’d arrived. Jill read sitting high up where she had a good view of Lake Michigan and the Fox Islands, and I went down to the beach and took photos for a few hours. 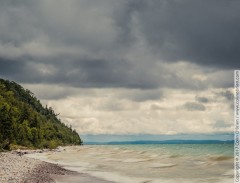 I don’t often use filters like my ND Grads, but here I was looking at a mostly clear, straight horizon and a bright sky, and I had plenty of time. I took the opportunity to try various experiments with different filters, especially different filter combinations, while taking photos into the sun. Looking at the photos afterwards though, there seems to be definite color cast issues, which are not lending themselves to a fix in Lightroom. I wasn’t making notes of which filters were used on which photos, so now I will have to do some proper tests to see which filters caused these issues, and see which ones might need replacing, or simply abandoning if I am not finding all that much use for them. Generally speaking the scenes I am photographing have a much more varied “horizon” and my camera has such latitude, that most situations can be better handled by appropriate combination of exposure and development techniques. 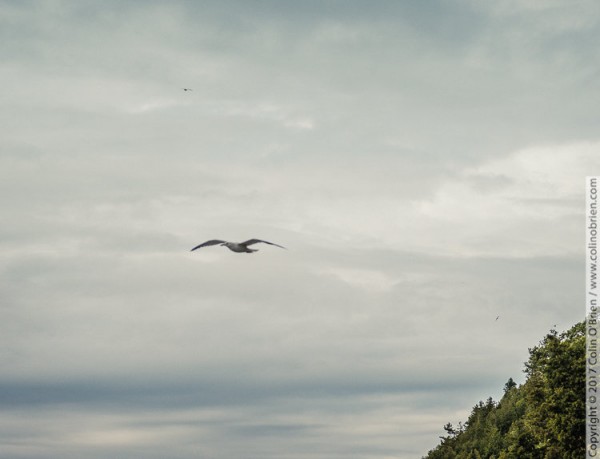 The trip finished with some obligatory Fishtown scenes (see top), and the obligatory long drive home.