When I returned from Scotland in February, this past weekend was marked on the calendar as “surprise trip”. Jill had decided she needed a “get out of dodge” trip in her future, and we hadn’t talked about the trip to Petoskey at that point; she did a pretty good job of keeping the secret although there were a couple of “leaks” in the days before we departed, so I knew at least we were headed to Indiana.

We stayed in a log cabin almost 10 miles north of Fort Wayne, so we were able to stop there on the way down, to have early dinner with Jill’s friend Joan. The cabin us by a large pond and there is some woodland beyond that; we managed 4 hikes, almost an hour each (great for Jill to walk on soft ground). Other than that, we just relaxed, read, never left the property – no wifi! The rushes in the first photo were in the big pond, just off the back deck of the cabin, and I took this photograph not long after we got settled. 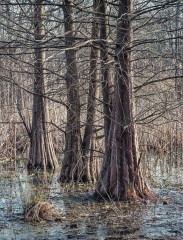 We saw these trees on our first walk after arriving, and I got out early the next morning to see what I could do with the camera. The pond had recently been treated to prevent undesirable plant growth, which gave it some curious colors.

The log cabin was at the back of a farm, and while really old, had been moved to its current position not so long ago. The farm is mostly focused on growing plants and flowers in greenhouses, though they have some animals as well. When we arrived, we saw a sheep with the biggest, shaggiest coat I have ever seen, but the next day it was all gone – sorry we missed that!