One of the things I became very focused on even before, but more so after, my trip in March, 2017, was the whole idea of, if you want “endangered species” to survive, and hopefully prosper, then you needed to protect, and hopefully grow, endangered environments, or more particularly, the environments those species needed to be in to find food and shelter. On my previous trip, I did manage to visit Dundreggan Estate that Trees for Life have to promote these ideas. 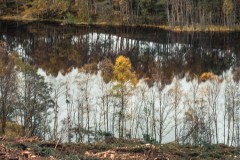 After I got home I signed up with the John Muir Trust and it was they who alerted me to the effort to “join up” a number of forests including Tay Forest Park – this is important because some animals needs a large range just to survive, and others will benefit from a greater contiguous area to promote ideas like genetic diversity, which itself can contribute to the survival of the species. Having made my donation, I was interested to see for myself what it all looked like, and it was already a stretch from Cannich and the next day down to Moffat was going to be another stretch, and without doing further research, and having “Tay” locked in my brain, I found somewhere to stay in Killin on the far side of Loch Tay, and when I was looking to leave the A9 (having decided the simplest way to get there “quickly” was to go back into Inverness) I realized I was heading way beyond where I needed to be, which was actually sort of around Loch Tummel, but not as far south and west as Loch Tay. 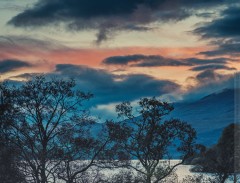 All of which goes to say, another day with too much driving and not a lot of photography. We could say that it didn’t help that I took a diversion up past Dunalastair, but I did get quite a few photographs of active forestry up there. And Loch Tummel and Loch Kimardochy and where the River Tay leaves Loch Tay, they all provided photographs worth taking.